I want to put together a "freeze-you-out-on-a-100-degree-day" under dash A/C system for this nice old driver pickup. I'm thinking of R134a, the big old standard GM A6(?) compressor, with the biggest parallel-flow condenser I can mount, feeding an under dash evaporator with a TXV (possibly a POA???)

An under dash add-on instead of one of the various "Perfict Fit" heater/AC units, mostly because I've recently had the entire heater box and controls out (massive can of worms, the bumper and fender have to come off) gone through and reinstalled, and it all works fantastic. Plus, I'm not going to cut face vents into the dash.

COMPRESSOR: I like the GM A6 compressors, but given their higher cost (2x a Sanden-type) and the relatively small cab area, would my money be better spent elsewhere? Also going to need compressor brackets.

CONDENSER: ackits parallel flow. The radiator core is 17x28, I think I can go slightly bigger in front, maybe the ackits 19.5 x 30.5"). The truck currently has the original engine-driven 4-blade metal fan and a close-fitting fan shroud. I'm leaning toward a GM a/c metal fan with a thermal fan clutch, but electric fans are an option.

EVAPORATOR: I like the look of the old Mark IV units, and see that Vintage Air is making / selling them with original-stamping metal housings. As an alternative, there is the Classic Auto Air under dash units that look similar (I've got one in my '62 Ranchero that works pretty well, although on a REALLY hot West Texas say I kinda wish it had more airflow). Or, I've seen the wider units with the Evap core over on the passenger side and the knobs and outlets towards the center of the cab. Whichever works best is what I'm after. Am I not seeing an a kits.com underdash unit?

THROTTLING: just go with the under dash units' TXV? I'm not a fan of the orifice tube / cycling clutch systems, (and the under dash units don't appear to use orifice tubes, just a TVX, but getting ahold of an NOS POA valve will probably break my budget, although I can get lots of old ones from a local wrecking yard. I've re-adjusted the one on my '71 Buick for R134a - and assume I could test / readjust one of them? Would it even be worth the effort?

Any opinions or tips?
Top

Thanks, I was hoping that y'all had underdash evaporators. Are there any available pictures of them, and prices?

Consider a V5 or V7 variable displacement compressor, it is the modern equivalent to a POA system. The wiring is very simple since you just need to turn the compressor on and let it run. A high-low (trinary) pressure switch should be installed in the high side line to protect the system against overpressure or leak out.
Top

MARK IV had 3 basic hang on evaporators with metal diecast bezels chromed and all used TXV internally equalized:
1)Allegro with approx. 18,500 BTU per IMACA test
2) Monitor with 16000 BTU
3) Escort with 13500 BTU
The Vintage Mark IV is a hybrid between the Monitor and the Escort but basically Escort
My 56 Chevy PU had a Allegro with a monster Modine serpentine 1.125" thick condenser and a 6 blade steep twist angle engine fan. I could frost the rear window with condensate on the exterior and could hang meat inside.
I loaned Vintage the cross sectional drawing of the MARK IV Monitor (which I drew in 63) during Vintage's recent development. I also still have the Monitor bezel drawing i made in 63.
e-bay sometimes has some of of these evaps
Caution: evaporator BTU (energy) plus approx 35% (for compressor horsepower energy) equal minimum condenser heat rejection (energy) requirement, i. e., do not oversize compressor cubic inch displacement per hour or undersize condenser/airflow. The 12.6 cubic inch Alma A-6 is too much capacity unless it is turning less the 1:1 engine rpm
Hotrodac
ref book "How to Air Condition Your Hot Rod" @ Vintage Air
Top

Need to learn about variable displacement compressors - I assume they work with a standard TXV?

Thanks ice for the info, I'll look for that ref book on vintages site.

Any answers about pics of the ackits.com Evap units?
Top

The OEM evaporator was a energy waster because it always draws in approx 30% outside hot humid air for cigar smokers pleasure, therefore a add on underdash evap should be matched with a smaller compressor displacement or lower drive ratio.
OEMs never use variable compressors with a standard txv because they both try to control the refrigerant mass flow which results in wide temperature swings at the louvers (20 degrees) under certian driving conditions especially low heat loads..
OEMs use orifice tube with VC which doesn't change or a dampened or dual refrigerant charged txv which lets the VC do the primary modulation
hotrodac
Top

Ice n topics I’d like to know more about the Mark IV’s . I have acquired several models of them and find it very hard to find any old literature as far as model in what year they are.
What does an escort look like?

I have a couple old Mark 4’s monitors, the first is the one with round vents. It looks like they came out in 58? Then I have another with square vents.

Sounds like you worked there. Can you provide pictures and year they are? Interwebs just keeps popping up the new vintage air model. 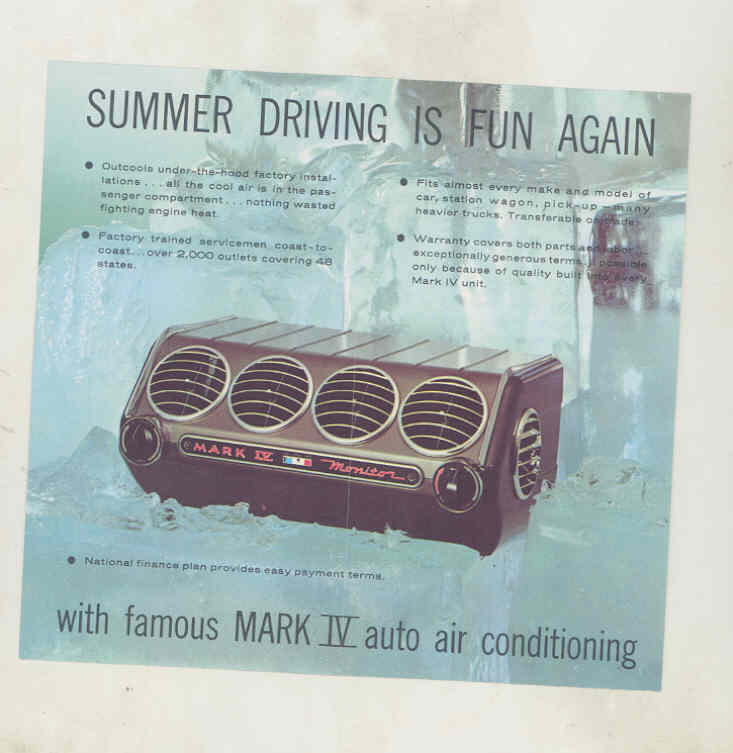 mk378 wrote:Consider a V5 or V7 variable displacement compressor, it is the modern equivalent to a POA system. The wiring is very simple since you just need to turn the compressor on and let it run. A high-low (trinary) pressure switch should be installed in the high side line to protect the system against overpressure or leak out.

Can these style compressors be bought in a v-belt setup?
Top