Dougflas wrote:I personally think you're wasting your time trying to flush that condenser. Corvettes were know for having lousy AC systems to start with. To bring the high side down, mist the condenser with a water hose. If the high side drops like a rock, you have possibly an air flow problem and you're not rejecting heat.

Airflow isn't an issue. Condenser is clean all the way through.

And yes, C4 'Vettes always seem to be marginal on cooling. Whether you're talking engine or ac....
Top

You still need to mist the condenser with a hose. Passages may be plugged internally. Air may flow thru the outside of the condenser but not thru all the passages. I probably did not explain that. Sorry
Top

Dougflas wrote:You still need to mist the condenser with a hose. Passages may be plugged internally. Air may flow thru the outside of the condenser but not thru all the passages. I probably did not explain that. Sorry

Sounds like a previous owner went down the Cliplight / ID path. Hopefully the evaporator is ok.
Top

Sounds like a previous owner went down the Cliplight / ID path. Hopefully the evaporator is ok.

that's an easy over 500 cad after all said and done.

Turned the old condenser up on its open tubes. Got one small dot of oil out of it. I even put 100 psi of air to it, nothing. I would think there should be more oil in it than that, unless its all blocked up solid in the bottom of it....
Top

hmmmm, laid the condenser on teh bench and filled it with MEK. Didn't take a full liter. Maybe 3/4 liter.

I'll let that sit overnight and see what the morning brings.

trying to get accumulator out now.

Steel nuts and aluminum tube/fittings.......what the hell were they thinking?

spoke too soon. Left some penetrating fluid on them for about an hour. Double wrenched it and after some serious grip strength exertion......pop!

got both loose and dryer out.

Drained the accumulator and there was actually oil in it!

Unfortunately, what did come out of it wasn't too impressive. The oil wasn't bad, still a straw color. But there's lots of little "floaty bits" in it as well. All black from what I can tell, nothing metallic. So I assume it's all broken down seal material.

Ran a magnet through the oil and nothing picked up, so that's good.

But there's almost a sand like substance in it. Very, very fine. I would assume that's probably desiccant, which I'm guessing could mean a roached desiccant bag. I might cut the accumulator open to see what's up inside it.

Overall, not good signs for the condenser.......
Top

So I’ve done some price checking. Cheapest I’m going to get off for a new condenser is between 700-800 bucks.

The problem with ordering inside Canada is every place wants over 500 cad. Then chuck 15% tax on that. Then shipping. Add in more money since its an “oversized” item. Then they all want to insure it.

Problem with ordering out of the states is the exchange rate. Then chuck all the other things listed above on for taxes, shipping, etc. AND THEN: tack on duries and customs since its crossing the border.

Yeesh. All this for some aluminum tube and tin foil fins!

I’m hopeful an overnight sit in MEK and a good blowout will do something, but I’m not counting on it.

Since the condenser is effed at that point anyways, I might try an idea:

A loooong time ago one of the things we used to do was “rod” radiators. Basically, we’d take the tanks off and then knock the crud in the tubes loose with a small rod we could slide in and out of the tubes. A good steam batch and we could put it back together good as new.
Now, the condenser in my Vette is the 6mm tubes, which to my understanding means they are actually 6 mm id tubes. Ie: nothing in them. If they were plugged, “rodding” them would clear them out. But theres no tanks to remove to expose the tubes so I’m stuck again.

The tubes are aluminum. Soft and easy to drill. So if I drill a small hole in the upright tubes right over the horizontal tube, I can slip a small diameter rod in there and break any clogs loose. But then I’ve got a hole in the condenser.

Well, I’ve got a 250 amp water cooled TIG over in the corner. I do lots of aluminum work (manifolds, cages, etc) so I’m pretty good at it. Whats to stop me from just TIG-ing those little drill holes shut? Nothing. Not only that, if I get to that point the condenser is effed anyways, so I can’t make it any worse off.

So it will either get stronger and live, or it will die on the operating table.

Hey, at least it being aluminum I can melt it down and turn it into ingots for the lathe/mill, so it wouldn’t be a total loss if it dies...
Top

OK, I'm getting pretty sure the condenser isn't an issue.

I left the MEK in it overnight and drained this am. Got a little bit of yellow color (IE: dissolved oil) and that's it.

Blew it out with shop air (mine is dry, I run a plasma cutter off it and have a big drier) and got nothing but more MEK.

SO, how to determine if it's clogged or clear it out if it is? I almost wish it had the old tube and fin....

OK, so it's suspect for clogging. Can't put it back in like that, sure don't want to spend the better part of a grand to get a new one. At least, not before I have too.

So out comes the drill: 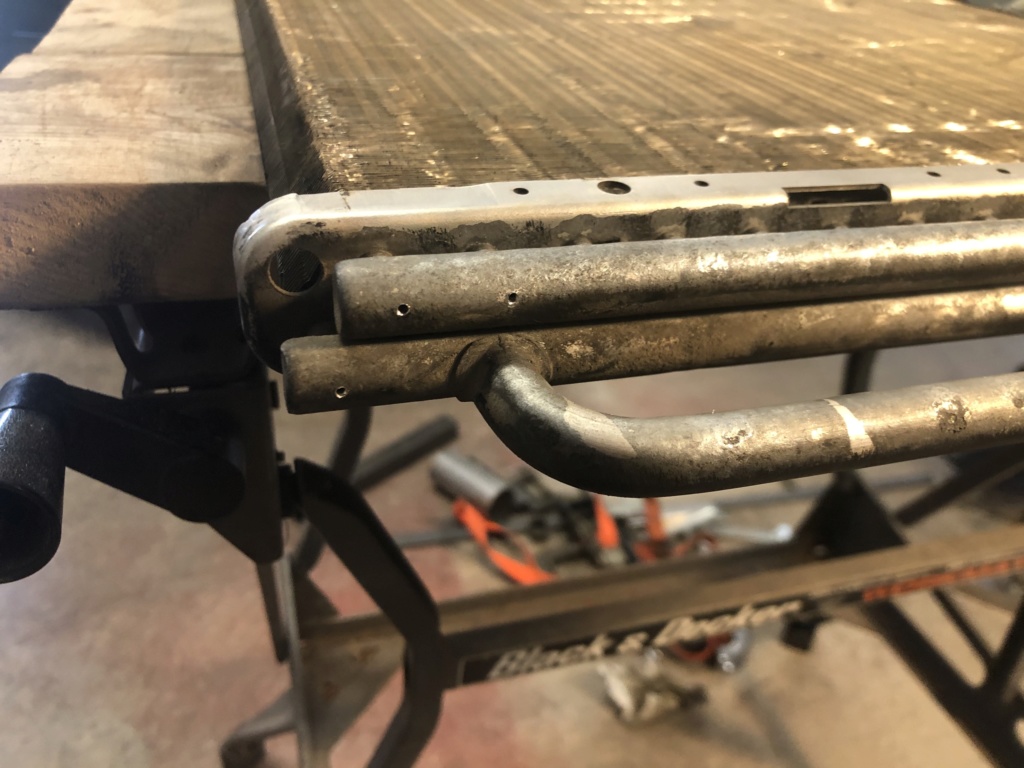 Well, instead of drilling another 15-20 holes, I just go right to the middle tubes and check them out: 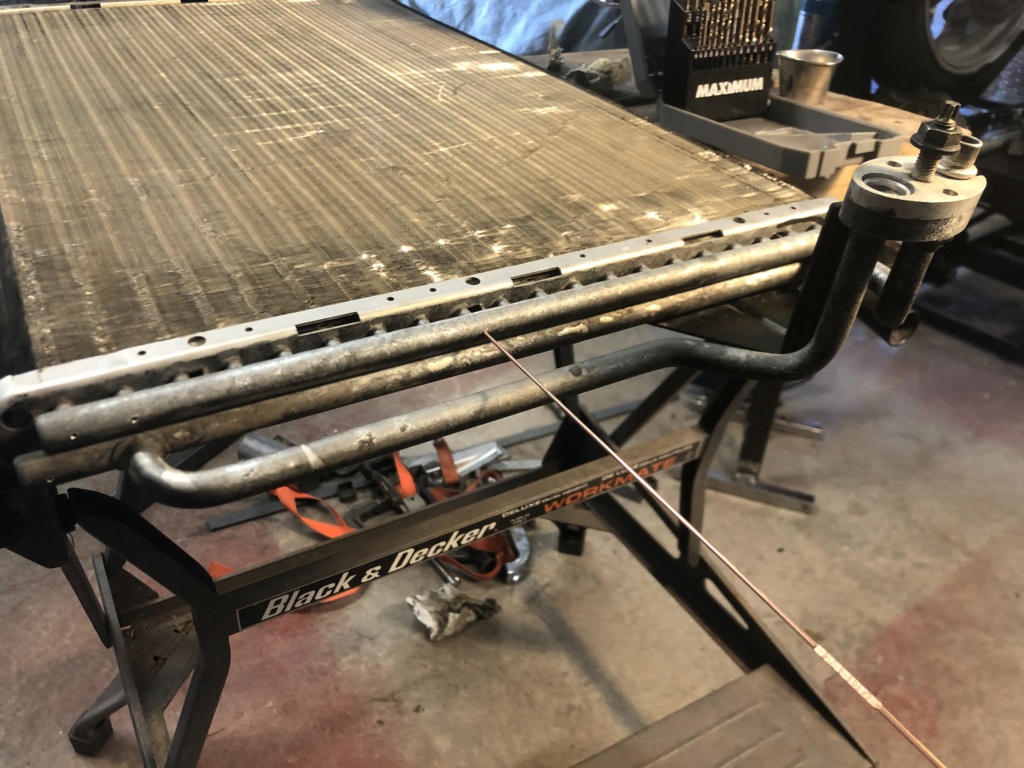 So, unless someone can explain to me why not, I'm going to say the condenser is clear.

Hmmm, I think I'll cut open the old accumulator and have a looky see.

Also did some quick math and forty two lengths of 26" six mm diam tubes works out to roughly .78 liters. Which is right about what the condenser held when I filled it with MEK. Sounds like it's got nothing but air in there by my rough reckoning....
Top

Cut open the accumulator. Not much to see here and nothing looks out of place. 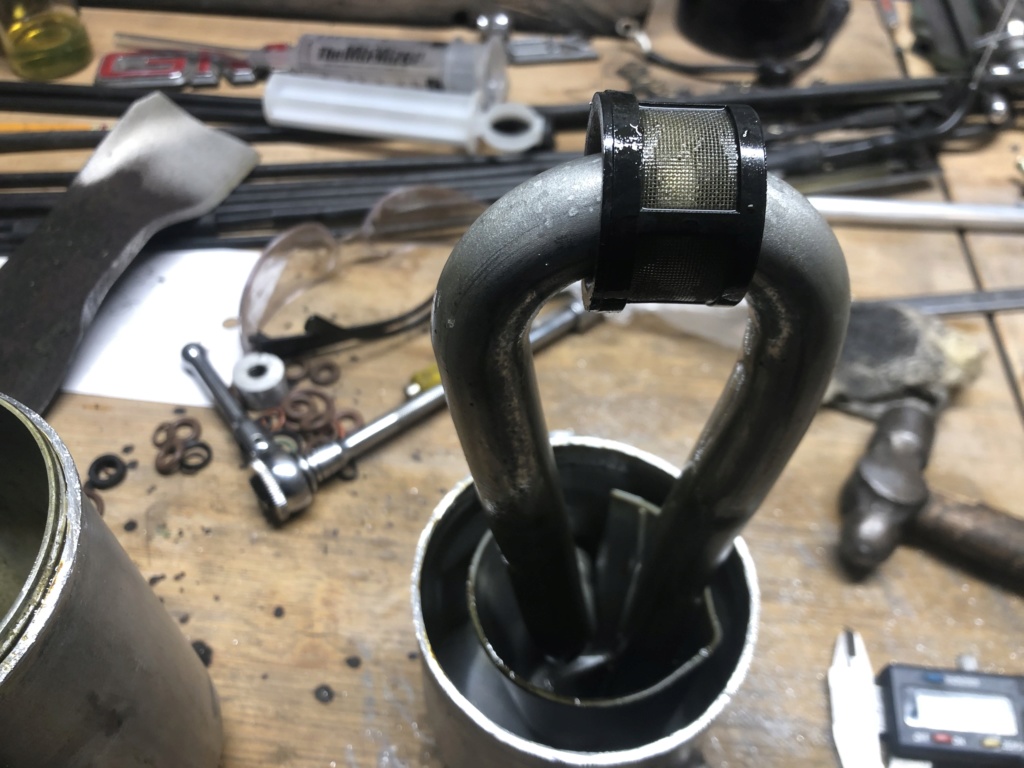 Looks all open and (relatively) clean, even the screen over the orifice. 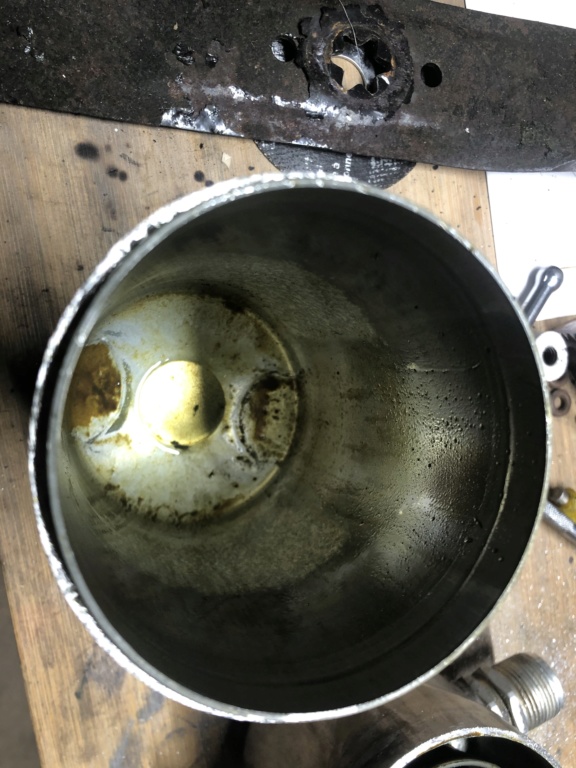 Not much of anything there. 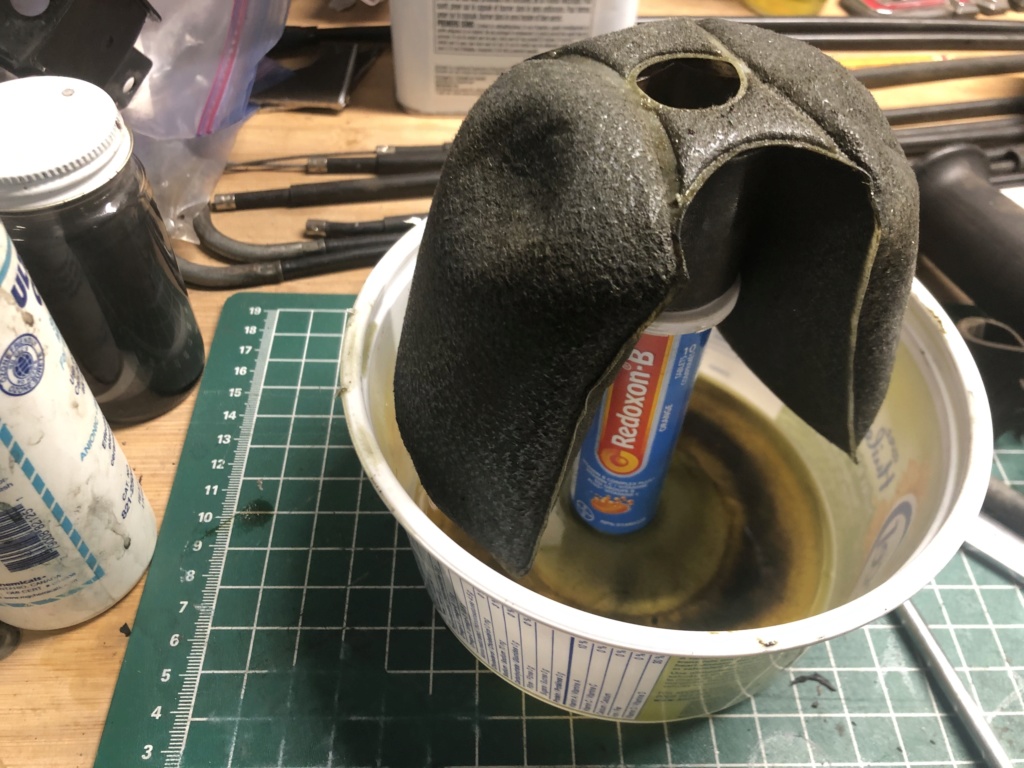 Nothing to see here either. Bags are intact, no desiccant beads anywhere. About all I can say about it is you get black “dust” off the bags if tou try and squeeze the oil out of them.

So, condenser clear. Accumulator clear. Blew air through the evap core and no noticed restrictions.

Why is this not working? Why is it not cooling? About all I have left is the compressor. I’d rather not take it apart again and risk breaking the carbon seal, but I’m not sure where else to look. Its all just hoses and tubes making up the rest of the system and they’re clear.

I don’t suppose anyone has a manual for teardown/rebuild of a Denso 10pa20C compressor, do they?
Top
Post Reply
59 posts