by Miggy
Hey all, first post here! I need help with the mounting location of the temperature sensor of the evaporator of my car.

I had the evaporator replaced recently and i dont think the ac guy knew where exactly to install the temperature probe. He installed it on the upper left side of the evaporator but the compressor would cycle before the system actually gets cold. So he mounted it in the middle of the evaporator, but then it wouldnt shut off until the line starts to frost.

I searched for pictures of the original evaporator assembly online and found that the probe is on the lower left so we moved it there. But again the compressor would shut of when it isnt cold enough yet, though not as worse as the first location.

I think that maybe because the evaporator installed is a cheap replacement and the mounting of the temp probe isnt the same as the original one, is there any way to determine the best place to mount the probe? My cars a 1997 sentra by the way.

I hope my explanation was easy to understand, kinda hard to explain it. Thanks.

by Miggy
This is the image of the evaporator that i found: 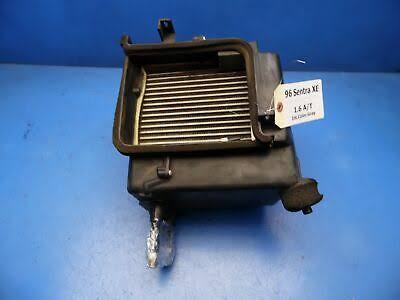 Sorry, the pic doesnt give a clear view of the sensor probe but i hope its easy to understand, thanks.

by JohnHere
A few observations and questions come to mind.

Why did you have the evaporator replaced? Refrigerant leak, fins clogged with debris, or something else? Is the evaporator the only component that was replaced? At the minimum, the receiver/dryer (R/D) should have been changed at the same time and oil added to the components before recharging.

As you know, the evaporator uses a probe (thermistor) to monitor its temperature. One of the probe's purposes is to cycle the compressor on and off so that the evaporator doesn't ice up and block airflow into the cabin. The probe also indicates that this system has a thermostatic expansion valve (TXV).

Was the system evacuated and recharged correctly by weight, what pressures was the tech seeing at what ambient temperature / engine RPM, and what center vent temps is the system producing? The low pressure, in particular, could give a clue about the condition of the TXV. The symptoms you're experiencing could also be caused by a low charge even if it's off by just a couple of ounces.

The thermistor should work correctly assuming that it was placed in the original location (usually the middle) of the new evaporator core. But since the vehicle is about 22 years old, it's possible that the original thermistor is failing by now. Was it tested and/or replaced?

by Miggy
Thanks for your response.

The evaporators fins were clogged with dirt and no amount of cleaning helped.

The TXV and drier were both replaced, the ac lines and condenser were flushed.

The system was vacuumed for about 30 minutes. The amount of oil added was 200ml, the refrigerant added by weight is 0.65kg as per the sticker in the hood. I did not look at the gauges clearly but the low side was at about 45 psi at idle speed, and ambient temps were about 30 degrees celsius.

The temperature probe has been replaced a few months back. The temps at the center vent with the fan speed at max was 25 degrees before the compressor shuts off. (The probe at the upper right side)
The temps would reach 18 degrees celsius with the probe in the middle of the evaporator, but it wouldnt turn off until the low pressure side starts freezing.
With the probe at the lower left side of the evaporator, the temps would reach 23 degrees celsius before the compressor shuts off.

Just another note though, i think the sentras ac here were specced a bit oversized compared to US spec sentras. Specifically the compressor.

by JohnHere
Everything that has been done so far sounds good, except for:

When the flushing was done, did any of the lines have mufflers (can-looking devices) on them? Lines with mufflers can't be flushed because some of the flushing solvent invariably remains in the muffler, contaminating the new refrigerant and oil.

Assuming that the system originally had a full charge of oil, 200 ml. (6.76 oz.) of oil added to it without draining the compressor would result in about twice as much oil in the system that it calls for. Too much oil affects pressures and could also disrupt the compressor's normal cycling.

You didn't mention the high-pressure reading, but 45 PSI on the low side seems too high for that vehicle. So I'm not surprised that your vent temps are as warm as they are when the compressor is running. It's also possible that the high side is now so high (caused by the excess oil) that it's bumping into the high-pressure cut-off switch and shutting off the compressor prematurely.

The fix is to discharge the system by recovering the refrigerant, replace any of the lines with mufflers (if necessary), manually drain the compressor of oil, and re-flush everything else to remove any residual oil. Then re-fill the compressor with 200 ml. (6.76 oz.) of PAG-100, reassemble everything, evacuate/recharge, and performance test. If the compressor won't take all 200 ml. of oil, I'd put in about 150 ml. (5 oz.) and distribute the rest to the evaporator, condenser, and receiver/dryer.

by JohnHere
I forgot to mention that the receiver/dryer and compressor should not be flushed, either.

by Miggy
There are no mufflers in any of the lines. The compressor was also removed from the car and was drained of all oil. And yes, the oil the tech used is PAG-100. The tech also tried jumping the high pressure switch thinking it might be defective but there was no change. The compressor would still turn off at warmer than normal temps.

I did not check the gauges carefully when they were installed so im not 100% sure. Ill have it rechecked tomorrow as its night here right now.

Miggy wrote:There are no mufflers in any of the lines. The compressor was also removed from the car and was drained of all oil. And yes, the oil the tech used is PAG-100. The tech also tried jumping the high pressure switch thinking it might be defective but there was no change. The compressor would still turn off at warmer than normal temps.

Okay, all of that sounds good.

A few more questions:
When you depress the button on the dash to turn on the A/C, does the light in the button ever blink?
Have you replaced the A/C relay? It's usually located inside a rectangular plastic box under the hood, along with several other relays and fuses within the box. It's location is typically marked on a diagram inside the top of the lid.
Have you tried another new OEM thermistor? Unfortunately, "new" doesn't always mean "good." I've seen a few new ones that were out of spec right from the box.
Have you tried turning the compressor by hand (the center part) to see whether it might be binding or "lumpy?"
Is it the original compressor? If so, the clutch might be beginning to fail after 22 years, which could cause unusual engagement and disengagement.

Let us know the high and low pressures as well with the A/C on, engine at about 1,800 RPM, blower on high, doors and windows open.

by Miggy
No, the ac button light does not blink. The ac relay has also been replaced recently.

Havent tried another thermistor, but we will try a known good used one.

The compressor was replaced a year ago with a brand new original nissan unit, i also had the condenser replaced with a good quality replacement just for peace of mind.

The ac pressures at idle with blower at max and windows open are: 45 psi low and 260 psi high. Unfortunately we didnt get any readings at above idle speed.

Coincidentally, one of the radiator fans conked out just awhile ago. Thinking that might be the problem, we replaced the motor and tested again. Still the same, the ac would cycle at less than adequate temps.

by snorky
a 30 minute vacuum after a system opening is not long enough to pull out moisture and leftover flushing vapors esp in temps below 85 degrees and often times the vac pumps used are too weak to pull deep enough giving higher pressures and weaker performance plus contaminates the oil and desiccant resulting in shorter system life. Place the sensor towards the center of the evap or the slight left side, with the ac off and the temp set at cold do you get any heat from the vent indicating the blend door is stuck or its seals have failed? when the low line was frosting did you get proper vent temps? even some aftermarket resistor packs and fan motors will greatly reduce air flow across the evap, improper pressures/sensors/readings can make variable compressors behave badly even as little as a oz over or under the limits of oil and or gas will cause problems on newer stuff.
All times are UTC-07:00
Page 1 of 3
Powered by phpBB® Forum Software © phpBB Limited
https://www.phpbb.com/