First, I apologize, I know this is a long post with multiple questions, but I would really appreciate it if any one would help with some advice.

I had a front shaft seal leak on a 10PA20C and decided to overhaul the entire compressor instead of just replacing the seal.

I couldnÃÂ¢ÃÂÃÂt find any additional problems when I stripped the compressor down (nice clean oil, no particles/dirt, no wear marks etc). Having gone this far I am going to change the shaft and thrust bearings and obviously all of the seals.

The system was running R12, but I need to convert to R134a (I have no option, R12 is not available in Spain anymore), so I will also be changing the accumulator and the rest of the system interconnecting seals.

I have been unable to source a suitable replacement parallel condenser, so I need to try to make the best of the original factory item.

Would any one give me some advice please?:-

1. What cleaning solution is safe to use on the compressor internals prior to reassembly?. My FSM suggests kerosene, but that translates to paraffin in europe and tends to have additivesÃÂ¢ÃÂÃÂ¦ is this the same and safe!?

2. Am I right in thinking that the converted system will need ÃÂ¢ÃÂÃÂEsterÃÂ¢ÃÂÃÂ type oil and not PAG?

3. As IÃÂ¢ÃÂÃÂm converting to R134a, are there any tips for getting the best performance out of the system, considering IÃÂ¢ÃÂÃÂm stuck with the factory condenser?. Should I change the orifice tube for a different size/type or do anything else?

4. The system has obviously been purged, but not yet flushed/cleaned. Is there a procedure I should get the garage (donÃÂ¢ÃÂÃÂt have my own AC equipment/gauges etc) to follow either before or after I refit the compressor?

Thanks for any help.

Apologies guyÃÂ¢ÃÂÃÂs, but can I ask another question?

Am I doing something wrong in the way I posted my message?. Should it be one question per post or something else differently, or am I asking stupid questions?.

Obviously it is an open forum and there is no obligation for replies, but I notice 50+ views and no responses!.

Fair doÃÂ¢ÃÂÃÂs if no one wants to reply, but please let me know if IÃÂ¢ÃÂÃÂm doing something wrong.

Hi LoJO, I admit to not being terribly knowledgable on GM systems, but my thoughts are:
1 & 2) I've rebuilt Sanden compressors. Some were in really bad shape. I cleaned the parts of the worst ones in kerosene first, then I followed up with alcohol, with a final rinse in acetone before assembly. I'm certain that there are more suitable solvents available. I used PAG46 (sparingly) for the assembly lubricant, as it's hydroscopic as noted. I then capped the compressor's ports until I was ready to install it. Then, just before installation I added 1/2 of the system oil to the compressor as the Sandens have a crankcase, and the other half of the oil to the receiver/drier.
3) If the car has a tube&fin condenser you would be better off finding a more efficient condenser. I have read that Corvettes are known for poor performance even using R12. This means that condenser capacity is already limited. R134a will make this worse.
4) There are several notes on this site regarding flushing procedures. I have found that around here, most shops will say they've flushed the system while not actually doing it.
5) Most times a conversion won't be able to use the full amount of refrigerant without having excessive high side pressures. I've read that 85% of the full charge is typical. This is of course due to having insufficient condenser capacity.

I'm sure that more knowledgable people will be along to help. I bet all the experts are working overtime in their shops fixing customer's cars!

Many thanks for the replyÃÂ¢ÃÂÃÂ¦ much appreciated.

I assumed the experts would be busy for a very long time and would miss my post forever, so I went ahead and de-greased the compressor internals with a commercial product (called KH7 in Spain, probably only a local brand). The kerosene I can find in Spain has oils and smell/fume additives for oil lamps etc., so I thought IÃÂ¢ÃÂÃÂd give that a miss. IÃÂ¢ÃÂÃÂll take your advice and now rinse everything with alcohol and follow that with acetone.

IÃÂ¢ÃÂÃÂm still confused on what oil to use. IÃÂ¢ÃÂÃÂve read that R134a systems use PAG, if so, IÃÂ¢ÃÂÃÂm wondering which grade of PAG in a Nippodenso 10PA20C?. IÃÂ¢ÃÂÃÂve also read that any system that has previously been filled with R12 shouldnÃÂ¢ÃÂÃÂt use PAG and Ester oil should be used instead, once again, if it is Ester, I wonder what type/grade (if Ester is graded!).

When I discover which oil to use, I will take your advice and lightly lube the pre-assembly with the same oilÃÂ¢ÃÂÃÂ¦ I wasnÃÂ¢ÃÂÃÂt keen on running dry bearings/pistons etc until the proper oil fill got around the compressor. Then I saw somewhere on this site about priming the compressor, which I thought IÃÂ¢ÃÂÃÂd do, as you say, just prior to sealing the system.

Yes, from what IÃÂ¢ÃÂÃÂve read, garage flushing is hit and miss. Unfortunately, I donÃÂ¢ÃÂÃÂt have the type of equipment to do it myself, so I am at their mercy reallyÃÂ¢ÃÂÃÂ¦ I can only hope and/or possibly remove all the components and see what I can do. Similarly, getting an alternative condenser with modified fittings/hoses etc., is a non-runner in Spain, so IÃÂ¢ÃÂÃÂm stuck with factory item. ItÃÂ¢ÃÂÃÂs sad, but Spanish garages arenÃÂ¢ÃÂÃÂt really helpful when it comes to things like this.

Thank you again fasto. Help and info is very sparce locally and as I've never touched an AC system before, I do appreciate your advice.

Hi LoJo, my understanding of compressor oils is that PAG and mineral oil won't mix at all. Ester (or POE) oil is supposed to be compatible with either PAG or mineral oils, as well as either R12 or R134a. Thus, ester oil is prefered for R12 systems converted to R134a which might contain traces of mineral oils. Ester oil is also hydroscopic, so sealing the rebuilt compressor against mositure contamination is required. Note that any water absorbed by PAG or ester oils cannot be removed by vacuuming the system; it's in the oil chemically.
I recently did a conversion from R12 to R134a and I used "100 viscosity" ester oil, which seems to be the only viscosity offered. This conversion is working quite well. If I have some time I'll write it up.
Regarding a condenser, if you can find a 1994 or newer Corvette condenser it may well be a higher capacity "drop in" replacement. I suspect that this will be tricky to find in Europe, though. It is also possible that the car is equipped with a R134a condenser, as 1993/1994 was the changeover year for refrigerants.

Ester oil it will be then, just need to hope itÃÂ¢ÃÂÃÂs a normal stock item in stores. Thanks for the advice on water absorbsion, IÃÂ¢ÃÂÃÂll keep everything sealed as best I can.

I donÃÂ¢ÃÂÃÂt know how to identify a good condenser or a parallel type, but there must be a difference between the two that Ecklers (Corvette parts suppliers) are advertising and the look physically similarÃÂ¢ÃÂÃÂ¦ I will have to investigate more and also try to find out if other components should be changed with the 94+ condenser (orifice/evaporator tube, pressure switch). 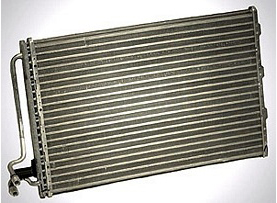 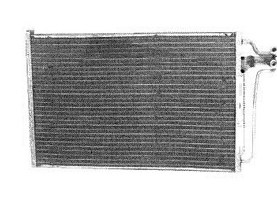 Thanks so much fasto for taking the time to respond and for brilliant suggestions and advice.

Hi LoJo, about oil circulation. In most systems the oil is "blown along" by the motion of the refrigerant, assuming the system is fully charged and the oil is "miscible" in the refrigerant. If the system has less than a full charge, the oil tends to settle out in the evaporator and the accumulator, starving the compressor. Some compressors have a small oil sump, like the Sanden I mentioned before - the Sanden has no pump for the oil, and relies on splashing inside the compressor as well as oil traveling with the refrigerant. Another type of compressor (mainly made by York) has an internal oil pump though these are not seen on newer cars.

I was able to get a small bottle of ester oil (120mL) from a local auto parts supplier that deals mainly with repair shops, as opposed to the type of auto parts shop that sells hubcaps and fog lights.

In the condenser pictures you show the 1990-1993 version appears to have a larger fin spacing, and fewer tubes, thus it would be less efficient at dissipating heat. If you mentally rotate the 1994-1996 picture 180 degrees the condensers look otherwise very similar, even the pipe connections look about the same. If the body style is the same between 1993 and 1994 you could certainly install the 1994 condenser and have a much better performing system. I cannot tell if the piping is exactly the same between the two condensers. If it is different you'd need to adapt the hoses on the car to the newer condenser. The picture below is from the ackits.com web site and describes the different types of condensers.

I am not familiar with orfice tube type systems as I've never worked on one. I think there is a change that can be made. Should you decide to upgrade to the 1994 condenser I would think that you should then use the 1994 orfice tube and 1994 refrigerant and oil quantities, as your system would be a 1994 system. Searching through that parts supplier's catalog comparing parts between the 1993 and 1994 cars should show up any other differences. I think the cycling switch may be different, too.

Thanks for the explanation on oil dispersal, that has always confused me, but now I understand a little better. I guess that if I add the recommended amount of oil (8oz in the vette manual) and from what IÃÂ¢ÃÂÃÂve read put say 6oz in the compressor and 2oz in the accumulator it will find itÃÂ¢ÃÂÃÂs correct levels in the components.

I agree, those condensers do look like a compatible fit with extra fins on the later model. I canÃÂ¢ÃÂÃÂt tell or find any info on them, so I not sure that the newer 94-96 is a parallel flow or not, but I suppose there must have been a reason and hopefully an improvement.

I made some enquiries/calculations and it will cost me about 400USD to get a condenser and ship with taxes/duties etc, which is almost double the ticket price. I donÃÂ¢ÃÂÃÂt know if it is a good idea, but I might try with the existing condenser firstÃÂ¢ÃÂÃÂ¦ see if/how it performs. IÃÂ¢ÃÂÃÂm also not very confident that I could work out what to do as far as o/tube and cycling switching which with the silly shipping costs for a condenser, also makes me wonder if trying the existing condenser is worthwhile. I assume IÃÂ¢ÃÂÃÂd only have to re-gas later to swap the condenser.

Anyway, again thanks VERY much for taking all the time and interest fasto, I really do appreciate it and IÃÂ¢ÃÂÃÂll post a follow up when IÃÂ¢ÃÂÃÂm done, just to say what did or didnÃÂ¢ÃÂÃÂt work.